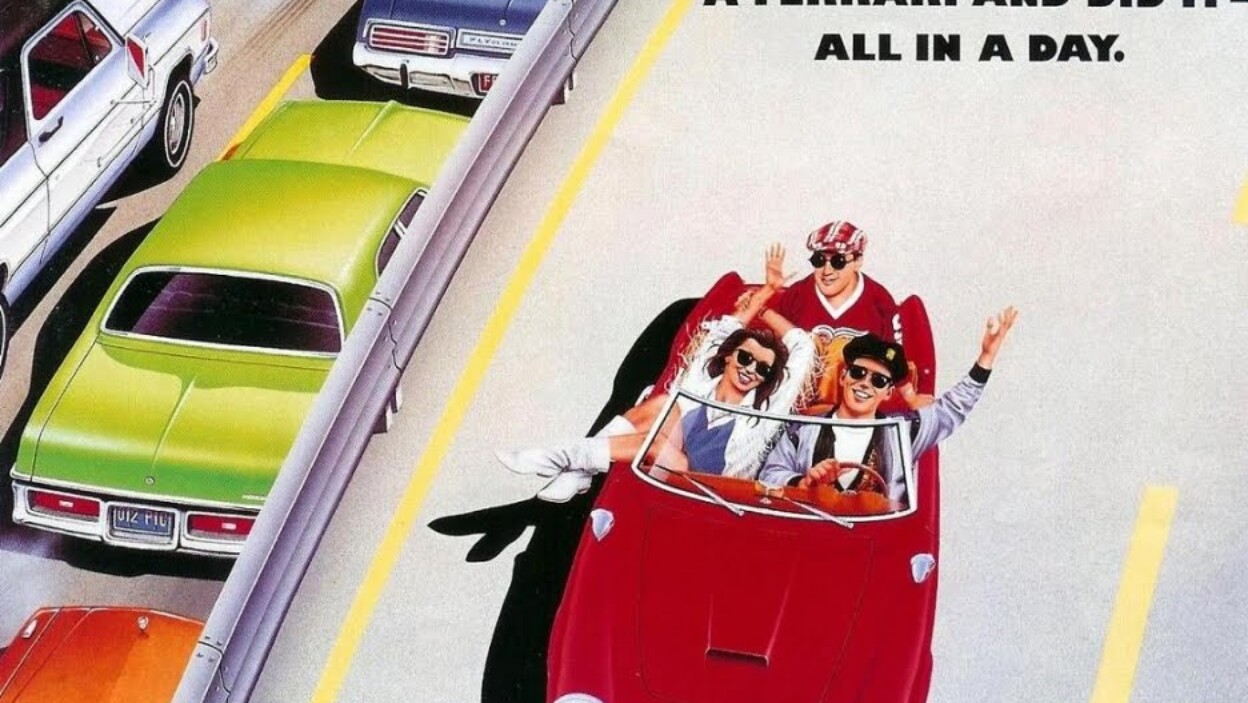 My mom and I were watching this movie. And Ammi’s instant comment was… “আমার কাছে এই চলচিত্রের সেরা quote হলো,

“Life moves pretty fast, if you don’t stop and look around once in a while, you could miss it.”

sis said the same after finishing the movie though

My thought on this movie

With Ferris Bueller’s Day Off the late writer/director John Hughes managed to catch lightening in a bottle. Sometimes, luck and timing will perfectly combine all the elements of a movie (plot, casting, setting, etc) to produce a result that becomes seminal and helps define a generation. Such films include Back to the Future, Field of Dreams, American Graffiti, Forrest Gump, Dazed and Confused, and Ferris Bueller’s Day Off. There is an unexplainable quality to these films that cannot be quantified, but one recurring element that they all share is a “coming of age” theme. These films may not rank among the best films ever made, but what makes them unique is how they so intimately connect with our romanticized memories of our own key life moments.

Facing a looming writer’s strike, it took less than a week for Hughes to write Ferris Bueller and he essentially shot the film based on the first draft of his screenplay. The film was Hughes’ love letter to his hometown of Chicago (“I really wanted to capture as much of Chicago as I could, not just the architecture and the landscape, but the spirit.”) and he wrote the story with Matthew Broderick specifically in mind for the lead role of Ferris Bueller. The story takes place in 1 day in the life of Ferris Bueller, a high schooler whose philosophy on life is, “Life moves pretty fast. If you don’t stop and look around once in a while, you could miss it.” As the film’s title says, Bueller decides to take the day off from school and have some fun with his best friend, Cameron (Alan Ruck), and girlfriend (Mia Sara). However, there are those who want to spoil Ferris’ fun, namely the Dean of Students at Ferris’ high school, Edward R. Rooney (Jeffrey Jones) and Ferris’ sister, Jeanie Bueller (Jennifer Grey).

That saying, “They don’t make them like they used to” is no more apt than it is for Ferris Buller. Not to sound like some grumpy old guy, but if Ferris Bueller were made today, it would undoubtedly be full of sexual innuendos, drug use, wall-to-wall product placements, and the comedy would probably be mean-spirited and sarcastic. Furthermore, in this day and age when major studio productions cost a minimum of $100 million to make, no risk-averse studio would have allowed John Hughes to take the creative liberties he did with Ferris Bueller by allowing him to insert such introspective scenes like the one that takes place at the Art Institute of Chicago. Unfortunately, Ferris Bueller would probably have to be funded as an indie movie through Kickstarter to have any chance of seeing light.

Like every single one of John Hughes’ film, Ferris Bueller’s appeal is not the story, but the characters. In fact, Hughes’ plotlines are really nothing but simplistic setups for his characters to grow into. The Breakfast Club was just about a group of high schoolers spending a detention Saturday in the library. Home Alone is simply about a boy who finds himself fending off a pair of burglars after being accidentally left behind at home by his parents. Weird Science is about two nerds who create the perfect woman with their computer. And Ferris Bueller is nothing more than a privileged suburban Chicago kid who ditches school to have a bit of fun. However, with all of these, what we most remember are the richly developed and very memorable characters that John Hughes created. Have a conversation with anyone about any John Hughes film and I can guarantee the focus of discussion will be on one of the characters.

The character of Ferris Bueller sort of reminds me of Michael J. Fox’s Alex Keaton character in Family Ties. Keaton was a dyed-in-the-wool Reagan Republican who always advocated the values of the Republican Party. Ferris Bueller doesn’t make any mention of the Republic Party nor Ronald Reagan, but his view on life clearly reflects the qualities of the Grand Ol’ Party. At the beginning of the film, when Ferris Bueller introduces us to his methods of faking out parents into thinking you are sick, he effectively tells us that life is all about experiencing the goods things in life (eating at nice restaurants, driving a Ferrari, going to ball games, etc.). This obviously requires money and it is safe to say that Ferris Bueller’s only reason for wanting to go to college and getting a job is to earn enough of it to maintain the rich lifestyle that he got to experience for 1 day in this movie. That was the essence of the Reagan 80’s where, as Michael Douglas’ Gordon Gecko famously said, greed was good.

Ferris Bueller is a privileged white kid who lives in a nice, suburban Chicago neighborhood. He lies to his oblivious parents, he skips school, his classmates think he is dying so they raise money that he doesn’t need, and he convinces his best friend to take his father’s prized Ferrari out for a spin even though he knows this will probably land his friend in deep shit. How can you possibly make such a character likable? And somehow, he is. Matthew Broderick imbues the character with an earnest innocence that prevents Bueller as coming off as being an arrogant, smarmy asshole. Ferris Bueller invites you to join in on the fun with him and it is difficult to not be taken in by his confidence and enthusiasm. Hughes succeeds in this partly by having Bueller break the 4th wall and talk to the audience directly. Due to it being a comedy, it is very easy to overlook how difficult it is to write such a character without making him totally unlikeable. The serendipitous casting of the boyish and mischievous looking Matthew Broderick certainly helped in that regard, but the credit mainly goes to John Hughes for walking that precarious balance between easily fucking up the character and accomplishing the far more difficult task of pulling it off.

However, I am probably not alone in saying that my favorite character in Ferris Bueller’s Day Off is Ferris Bueller’s best friend, the neurotic and awkward Cameron. It is amazing to think that when Alan Ruck was cast to play this high schooler, Ruck was almost 30 years old! And yet, never are you in doubt that Cameron is in high school. Many of the film’s greatest moments are those with Cameron (like the funny faces he makes at the fancy restaurant, his classic turn convincing Principal Rooney that he was Simone’s father to get her out of school for the day, and lest we forget, the film’s best scene in which Cameron decides to finally face up to his father). Cameron is the voice of caution and reason, but there is very little room for caution and reason in Ferris Bueller’s world, especially if caution and reason mean that Ferris has to go to school and be like everyone else.

The weakest character in the film, but the one every adolescent male in the 80’s probably masturbated to (along with Who’s the Boss’s Alyssa Milano…admit it) is Simone, played by Mia Sara. Molly Ringwald was reportedly interested in playing the role, but Hughes refused to cast her because he felt the role was too small for someone like Ringwald. He was right. The Simone character has very little to do except to dote on Ferris and follow the two guys around. She has very few lines and she is by far one of the most underdeveloped characters Hughes has ever written (even the small supporting role of the fucking school secretary, played by Mrs. Poole, has more dialogue and personality!).

As for the film’s antagonists, I never really dug the Edward Rooney character although I am a big fan of the actor, Jeffrey Jones (Amadeus, Beetlejuice). Principal Rooney is far too one-dimensional and the humor of having an idiotic authority figure no longer holds up. I would have preferred a less slapstick, less over-the-top approach to the character such as what Hughes did with the principal character in The Breakfast Club. On the other hand, as similarly one-dimensional as Ferris’ sister is, it is absolutely IMPOSSIBLE to not fall in love with Jennifer Grey (a pre-Dirty Dancing Jennifer Grey I might add). Unlike the caricature Hughes created with Ed Rooney, Jeanie Bueller realistically portrays every older bully sibling that every kid sibling has had the misfortune to live with. Her likeability is enhanced by the wonderfully hilarious and sweet scene where she finds herself at the police station and meets Charlie Sheen’s stoner character. Not only is it a funny scene (Sheen kills it), but we finally witness a thawing of Jeanie’s ice cold bitchiness and see a sweet side to her that adds a nice added layer to her character. Sidenote: Grey and Matthew Broderick ended up dating for awhile after this film.

One of the great things about Ferris Bueller’s Day Off is that there is no romantic subplot involving a boy and a girl (unless you count the very brief Jeanie/Charlie Sheen encounter as a romantic plot, which it really is not). I think the real reason for this is that such a subplot would distract from the film’s true love story – John Hughes’ romance with his hometown of Chicago. Like I stated before, Ferris Bueller’s Day Off is Hughes’ love letter to his city. Frame by frame, you can sense Hughes’ excitement to play tour guide with his audience and show them not only the geographical aspects of Chicago, but to also give us a sense of the city’s spirit. All of this culminates in the now iconic scene where Ferris Bueller sings Danke Schoen in downtown Chicago. This may be a little too cheesy for today’s jaded audiences, but for me, it remains a memorably cheerful and wonderful scene that continues to bring a smile to my face despite how many times I have seen this movie.

It is impossible to quantify the brilliance of Ferris Bueller’s Day Off. On the surface, this appears to be a fun, whimsical, and disposable teen comedy. But to shrug this film off is a huge mistake. This film offers it all – it is funny, smart, charming, insanely quotable, and it represents John Hughes at the peak of his career. By the way, I have not even mentioned the film’s great soundtrack, which is highlighted by the song that will forever be associated with Ferris Bueller’s Day Off – Yellow’s Oh Yeah. To appreciate the impact of this movie on our popular culture, think of this – Matthew Broderick has made MANY MANY other films throughout his career (WarGames, Election, Godzilla, The Producers) and yet, Ferris Bueller’s Day Off remains what he is best known for and I think it will forever be that way.